Hereza is a band from Beli Manastir, Croatia, founded in 2014 and ''I become death'' is their second full length album,  released on 13 of February, 2017 via Godz ov War Productions. 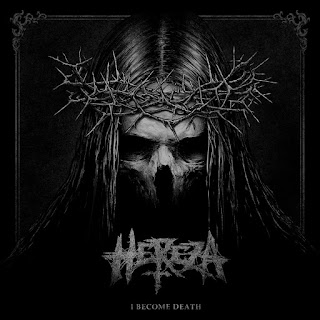 Title song, ''I become death'' begins with Oppenheimer's famous quote of Shiva from Bhagavad Gita,  "Now I am become Death, the destroyer of worlds." It perfectly suits this album. The Openheimer is known as the father of nuclear weapons, the man behind the Manhattan Project and the creation of the atomic bomb, and this LP is just like nuclear bomb - extremely fast, efficient and absolutely devastating. Incredible whipping power of these guys amazed me. In the first, above mentioned song we have a striking tremolo melody that stays stuck in mind. Tremolos are constantly intersected with amazing groove, death, thrash and HC passages, not allowing monotony. Growl vocals are deep and sharp, reminding me of Brutality, usually paired up with the roars, especially on a chaotic chorus on the first song and ''Unisti Pali Ruši'', while ''Jebem vas u usta 'ladna'' has mighty twin growl vocals on the chorus, crushing everything in their way with the most powerful impact. Solo melody that is joined in one segment is great, and ''Homo Homini Lupus Est'' solo passage that swirls with the chorus leaves a strong impression. ''In the Name of God '' has a nice solo that leads to Black Metal inferno, ending the song, and the dark and obscure solo on ''Tombcrawler'' has gloomy oriental overtones. Hereza sometimes sounds like a Swedish old school death, but on steroids, and it is most noticeable in the ''Full Moon Slaughter'', a song that has incredible vibe of Dismember, especially with beautiful terzas in the chorus. ''Torn from the death's bed'' begins with groove of potent HC riff, ''Uništi Pali Rusi'' starts with military command for  attack. Thrash riff in this song leaves no one indifferent. Above mentioned ''Tombcrawler'' begins with sound of waves and dark sinister chord decomposition on clean guitar and this song is a great ending to an excellent album.

Furious, energetic and devastating blackened crust is tastefully combined with thrashing death elements, not allowing even a second of rest. Like we say in our language, ''Ko preživi, pričaće''.