Sickrites is the band from Russia and their release '' Irrelevant Megaliths Death '' was published in 2013 under the label Cryptic Arts Records (on Vynil), and in the form of CD for Osmose Records in 2014.

One of the most unique death metal bands in every sense, especially because of extremely unique and original implementation creepy keyboards on the gloomiest death metal background, which create exceptionaly obscure and both leaden-heavy and ethereal atmosphere. The album is embroidered with  spooky echoed vocals and keyboards, like a mist of spectres hovering over certain segments, never being monotonous and always in a different manner. The dark and isolated tremolo theme in deeper scale which begins '' Pillars Of The Fallen Light "opens the gate to chaos in its purest form, with furious whipping drums, demonic screaming guitar squeals, and extremely massive and deep growl vocals from the deepest cosmic catacombs that are crushing everything in their way. ''Procession to Belial '' begins a spellbinding keyboard intro, '' Deathstorms '' has a dramatic and apocalyptic motif, and melting and enchanting string shades on '' Pillars Of The Fallen Light '' are absolutely mesmerizing. '' The Dweller In The Fleshtombs '' in its own turn begins with unusual and almost electro sci-fi motif, while impressive and creepy keyboard theme in the background of slower riff on '' Necrogenesis Void '' brings atmosphere of the purest cosmic horror. '' The Temple '' with dark motives  has implemented Bells that echo eerily, and that motive ends the next track, '' New World Hosanna '. '' The Rite'' begins with mantra that sounds absolutely shaman, and implemented Jaw's Harp sounds (a lot of Russian bands like Jassa use it too) give the quite Siberian charm . 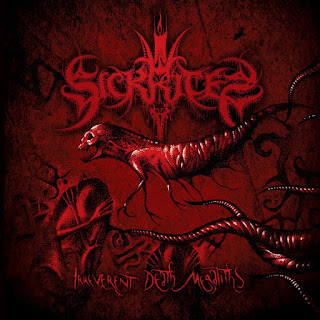 Solos on most songs are schizoid screams of tortured guitar squeals, sometimes accelerating in Azagthoth-like fast or weeping passages. As for the riffs, slow doomy riffs with sneaking ghostly keyboards are constantly alternating with rapid tremolos. The songs  arrangements are constantly evolving, not allowing even a moment of monotony. Tremolo passages are generally played with open-string principle, with occasional palm-muted riff segments, such as thrashy jerk somewhere in the middle of '' Procession to Belial '. '' Moloch Ascending '' begins with melodic and somehow epic BM tremolo, and '' Darkness Tremendous '' also has a beautiful melodious tremolo too.

Posted by Bog Otac Reviews at 4:02 AM