Scath Na Déithe is a band from Dublin, Ireland, founded by Cathal Hughes and Stephen Todd. ''Pledge Nothing But Flesh'' is their first full length album independently published 13 January 2017, which will be released in cassette format for Metal Defiance Productions. 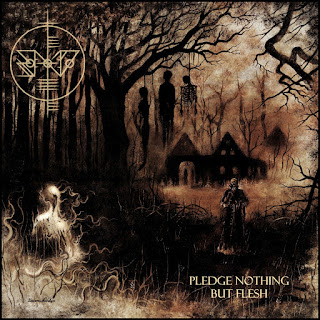 ''Sí Gaoithe'' is ghostly and eerie instrumental, which introduces us to a quite atmospheric metal release, characterized by poetic and nihilistic lyrics, guitars in a lower tuning, beautiful and somehow melancholic ethereal tremolo passages. Songs are extended, with the drum arrangement that's changing from fast ''aces'' and blast beats to slow and heavy doom metal-vibed courses. The listener is lost in dense fog of atmospheric  features that constantly give birth to remarkable and epic tremolo melodies. Vocal is resounding and quite striking growl combined with scream, and its directness is a great contrast to the mystifying arrangement of guitar passages, growing one from another like hydra heads. The band sounds like a clash of Fen  and Ruins Of Beverast, having unique and original sound. 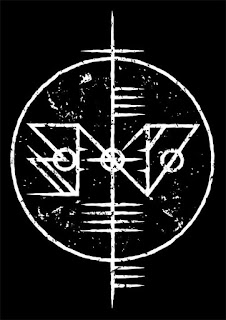 Prominent tremolo melodies followed by smooth doom drum rhythm begin my favorite track, ''Bloodless'', staying stuck in the memory. A melody somewhere after the third minute is personally the most beautiful moment of the album. Old school Death metal tremolo like the ones in the second half of ''This Unrecognized Desease '' and the death doom tunes in the first half ''Search Unending'' are great way to avoid monotony of decomposing chords and long atmo-trem passages. The motif in '' The Shackled Mind '' reminded me of the early death metal period of  Darkthrone. Both ''Search Unending'' and '' The Shackled Mind '' end with stunning atmospheric passages on clean / acoustic guitars, and '' At Marbh Fáilte'' is a beautiful instrumental where the acoustic guitar is accompanied by eerie keyboards.'' The Shackled Mind'' ends with slow chords with the howling wind in the background, similar to the way the album was started through intro.

Bandcamp: https://scathnadeithe.bandcamp.com/
Posted by Bog Otac Reviews at 10:28 AM