Gaerea is a band from Rome, Italy. It was founded in 2016 and their self-titled EP was released in 2016 via Everlasting Spew Records. The EP lasts exactly 27 minutes and 27 seconds, and I can not help but wonder if there is a sinister and omnious background behind the number that's been rounded that way, maybe even more mysterious then the faces of the band members.

Although we can say that the hoods and masks in black metal have become a real trend, almost replacing the traditional corpse paint, overused by the bands from Mgla to The Stone, I can sincerely say that I am more attracted by the visual concept of Gaerea than to the two aforementioned bands, in many more ways. Mysterious symbols that cover their hidden faces create some sort of esoteric and mystical aura. Nihilistic lyrics deal with contemporary and always current issues and archetypes, directing themselves as a sort of dialogue towards the listener. Not too misty and unspecific like lyrics of Mgla, not too saturated and overburdened with archaisms like the ones of The Stone, but direct, with perfect balance and measure. This fact alone makes the band somehow more receptive. Cover art is beautiful, but it's surface is hiding a lot of beautiful, dark and abstract art  motifs in the booklet with lyrics. 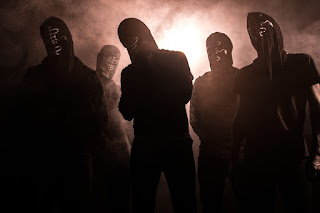 Mystical, incoming keyboards give birth to a spawn of dark, swirling tremolos and heavy, massive and monolithic riffs, alternating with modern black metal tendencies in chord formations and decompositions . Riffs are spontaneous at their evolving . Galloping mid tempo rhythms spontaneously transform into fast ones, introducing us to  new passages with ease. Motives seamlessly alternate, as well as rhythms, building a solid and strong arrangement of material. 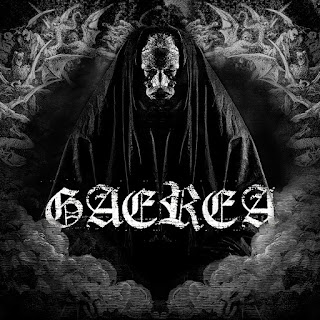 There are lots of interesting parts. ''Final Call'' begins with a mixture of dark riff and chord decomposition that evokes the spirit of Mayhem's ''Freezing Moon'', unleashing the stormy waves of devastating, dark tide, that keeps throwing our lifeless bodies around and slamming those against the rocks. In ''Void of numbness'', we have rock-solid mid tempo riffs, crushing everything in front of them as well,  and occational DSBM lurches, leading to a beautiful atmospheric, fading tremolos. ''Through Time'' is a song where obscure mid tempo riff is followed by almost HC rhythm at one segment, but the most beautiful part of the EP for me is the striking melody formed in the end of this song. Italians are obviously gifted for making those catchy, memorable melodies, and this one has reminded me of the one from Forgotten Tomb's ''Alone'', just carving their way into the mind. There are also a lot of spoken parts and recitations (like reciting of a prayer in Latin in ''Pray To Your False God''), emerging from the dense darkness of this EP, slightly exceeding to the constant piercing and whipping of maniacal, sharp and pretty harsh screams, that are one of the main ace features of this release.

Great, simply refreshing black metal, and I can not wait for their next release.

FB : https://www.facebook.com/gaerea/?fref=ts
Posted by Bog Otac Reviews at 6:06 AM