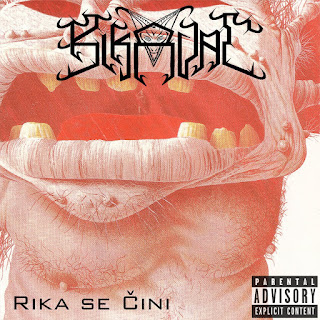 Rikavac is a metal band from Bar, Montenegro. This is a review of their self released EP "Rika Se Čini". The band consists of three members under aliases Ucjenjivač (bass and vocals), Podmuklać (guitar) and Ološ (drums). The whole EP is 12 minutes and 40 seconds long and consists of 4 tracks. Physical copies of CDs can be ordered from the band by contacting their Facebook page.


Rikavac is mostly mixture of Thrash, Death and Black Metal. Massive and catchy thrash riffs alternate with fast speed / thrash riffs, grinding all in front of them, there are also some dark and potent tremolo melodies. Vocals are also great, with deep growls alternate with harsh screams. With Rikavac being from country with non-existing recording studios and lack of professional metal production, programmed drums can not be taken as objection, especially not if it they're programmed well and they don't sound so plastic. I hope that on their next release production will be even better. After all, Rikavac is one of the biggest hopes Montenegrin metal and I wish them a good luck in their future work while waiting for the new material.

(Originally written in Serbian for HeadBang)