Grotesque Ceremonium is the project founded by Batu Çetin, a man from Ankara behind many local Metal names, but he is best known as the vocalist of Cenotaph, Brutal Death Metal band that has been active since 1994. The project Grotesque Ceremonium has already released the EP entitled 'Blasphemous Goat Observance' '  in 2014. Full Length '' Demonic Inquisition '' was released in 2016 under the label of Satanath Records. 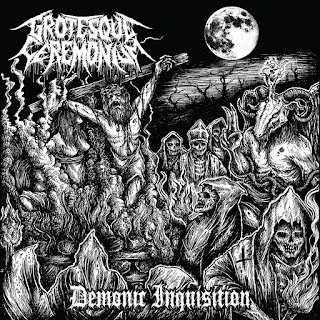 Excellent old school death metal release, the logo and cover art to the songs. Nothing innovative and revolutionary, but done with taste and everything has a cold, otherworldly,after/grave atmosphere. The massive and heavy riffs are real mid-tempo ride, alternating with OSDM tremolos and doom parts, accompanied by a deep, eerie vocals, which definitely contributes to the atmosphere that the band is trying to convey. The album closes with extraordinary cover of Incantation's . Release which definitely will not disappoint fans OSDM fans, and songs like ''Burned At The Stake'' and ''Crushing Morbid Death'' won't leave anyone indifferent.

(Originally written in Serbian for HeadBang, edited and translated by author)
Posted by Bog Otac Reviews at 6:28 AM